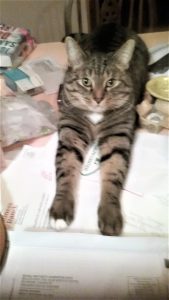 Friendly, professional, and genuine are only a few words that describe Mieshelle and her staff at The Cat Behavior Clinic! Prior to calling the clinic, I worked a year and a half with my vet to manage my five-year-old cat’s (Dublin) UTI s, urine crystals, and agression/anxiety towards another cat in the family of five cats. Dublin was on a special diet to avoid struvite crystals in his urine, and was also given Buspar for anxiety. Despite the changes, the additions, and my every creative effort, Dublin continued to spray in numerous areas of the house. I contacted The Cat Behavior Center, which I should have done much sooner! Mieshelle is a true cat expert! After my first phone consult, I received a follow up e-mail that reviewed the discussed information and included links to suggested products. Her ideas were easy to implement, and although they were simple adjustments, together they led to Dublin’s success. After a month of following Mieshelle’s suggestions, Dublin’s inappropriate marking has stopped! My sanity is beginning to return, and I am so grateful to Mieshelle and her staff! Listen to her advice and follow her tactics! Thank you, Cindy L. Kane, Pennsylvania