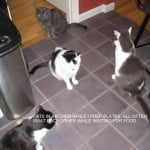 1/19/2012 INTERCAT AGGRESSION Update DAY 10 Mieshelle, 1) (Proprietary clinic behavior advice removed)- I immediately started and had IMMEDIATE reduction in Ash stalking other cats! (Advice removed) I saw a change within 24 hours. In fact the only one still staring down other kitties on a regular basis is Dallas (whom you met 5 years ago for same issue:) — and even he is far more tolerant of other cats when they come in his sight, go to use the litter box or generally just exist:) 🙂 🙂 in his sight… Ash’s recent behavior (that got us all so desperate and found me on the phone with you!!) – i.e., deliberately stalking to dominate and fight the others has STOPPED. I have not seen a single instance since I started (proprietary behavior technique removed). 2) HALLWAYS- We started (behavior advice removed) same night we had consultation with you and added (advice removed) has helped greatly. I haven’t seen or heard a fight in the halls since we started this. 3) (Behavior technique removed)- had been using 1x/day only in hallways but re-read the printed material you sent and added DR and LR this morning as I saw DALLAS stalk Ophelia in to a DR corner (only stalking we’ve heard or witnessed since you and I talked) . As of this morning I also added it in the kitchen where I prepare food plates and still observe some boxing behavior when they gather together 4) RESOURCES– (advice removed) 5)PLAY vs Fights I have (behavior advice removed.) Stalking others gone as far as I can tell!!! I SEE joy he gets in daily play and will continue no matter what. (advice removed). I started individual (advice removed). I will send a group update next week – Please let me know if you have thoughts on this initial report or question above. all the best, Joan and Brett PS. If we never progressed beyond this, we have had sanity saving improvement already and ALL our cats are SAFER as a result of your suggestions in our first conversation. Our newest addition, Sophie, has taken 90% of my attention the past 13 months due to major illnesses-having a RESULTS ORIENTED plan for the others is a gift beyond measure- to ALL of us. Thank you SO much