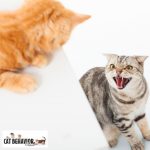 11/9/2011 Hi Mieshelle, First THANK YOU! This is the first follow up email since our session last Monday. There has been a vast improvement in Georgie chewing and eating non-food objects. Since our session, we (behavior advice removed) and she loves them. She will relentlessly (behavior advice removed). So far, we haven’t discovered any new item is chewed on. We now put their (behavior advice removed) into three (advice removed). We haven’t noticed anything different about their eating patterns. Yowng Yowng is still grooming himself, though I think it’s slightly less than usual. He also doesn’t seem to be quite as aggressive with Chacharoni and as often. We used to see him get very aggressive with her everyday, several times a day, but I realized today that I’ve seen him do that once in the last 4 days. We’re also getting Yowng Yowng onto the (behavior advice removed) fall asleep on the couch. Yay! The new (advice removed) has been a big hit with Georgie, she loves it so much that she will sit in it and just hang out. I actually woke up this morning to see her sitting in the litter box for a very long time. I think that is all we’ve noticed so far since last week. Again, THANK YOU!!!!