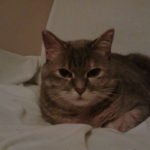 December 31, 2011 WEEK 2 URINE PROGRESS update “Sia” Good morning Oregon!! It is New Year’s Eve and it also just happens to be my anniversary! I do not know what I am more excited about? Going to a nice lunch with my honey or Sia’s litter box revelation?? I think it is an even split. If my husband was as much trouble as Sia was I may have divorced him! No more accidents that I know of ( I have a team of clean-up experts in my house) since I (behavior advice removed) Fundy is (behavior advice removed), AMEN. Even the poo is making it to the box. That did not bother me as much as the pee but it is nice to see four walls around it too! Sia just seems much happier. I have not seen them rough housing at all over the past few days. I would imagine having a “toilet” to go to with a bonus buzz while you are there is making a huge difference. I was wondering how to get the (behavior advice and questions removed) I will DIE if she regresses if I change it. It’s OK if I have to keep it, I was just asking. I know change is not a good idea right now where we finally have made progress. Looking forward to talking to you in the new year and I am so proud of my girl !! Everyone is asking me about her at work because I was taking advice from anyone who would listen! It was always bad news until you helped me! You have made a difference in our home. I can concentrate at work more now and not be so worried about what was going on at home and where the next mess would be. I still want to work with her…I think the stressors for her lie deeper that the litter. Kelly