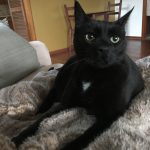 It’s been months since my initial consultation with Mieshelle and my cat Willy remains accident free! I called Mieshelle because my Willy was pooping outside of the box on the couch or bed consistently. He had had an “episode” a handful of times previously but it really got worse after he experienced some digestive issues. It was incredibly stressful for me always wondering if there would be another accident? My initial thought was Willy was upset about something and was acting out or being vindictive. Mieshelle assured me this was not the case. We talked extensively about his personality, patterns, food intake and review of his stools and schedule. We devised a plan during the first conversation and Willy has not had one single accident since! I had NO idea his behavior was (behavior information removed) and could be remedied with the suggestions Mieshelle offered. I have finally reached a place where I’m worry free and no longer wonder whether I’m going to find another accident. Mieshelle was incredibly thorough, informative, engaging, friendly and her suggestions work! I highly recommend having her help you and your pet. It was worth every penny!