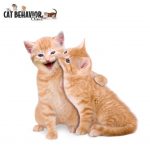 It’s Never Too Late to Know Thy Cat – Mieshelle, She is continuing to urinate 4-5 times in the litter box and we have been able to get her to (behavior plan removed). Overall she seems: 1) much more friendly and interested in interacting with everyone 2) much more calm even when something that typically would scare her occurs 3) genuinely seems like a happier cat overall We have slowly started opening up areas that she used to urinate with success of no urination. We started by first putting back down the door mats that she previously had urinated on. After about a week of no issues we removed the (behavior advice removed) and she has not urinated on the couch. Today we have taken the largest next step by opening up the bedroom doors, previously this would be a huge issue with her urinating on the beds. So far a full day has passed without incident. We hope this continues. Her late night crying at the doors still does occur, but is much less than it was before. With the opportunity to potentially leave open the bedroom doors, this might be resolved for good. (Behavior plan removed) which she absolutely LOVES — i have never seen her play with a toy so intently before She honestly just seems like a much more happier cat overall. I feel like we have been missing her messaging for years and she must finally feel like “wow they are finally doing what i have been trying to ask for over the last 8 years!” Thank you, Sean G. Naples, Florida 2019 Video Consultation