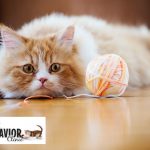 Mieshelle, After beginning Smokey’s behavior plan, we saw an immediate difference in his behavior. We have been faithfully keeping up with everything you said, from taking ourselves out of the equation (behavior advice removed). We purchased (behavior advice removed). We have been (behavior advice removed) and we immediately saw a difference. He already seems like he is able to self-soothe much more effectively. His meowing for food is already minimal to none, and when he does, it only lasts for a second and he’ll stop. He eats all of the food on his plate (no longer a bowl) and (behavior advice removed). He still does a little bit of the walking in your path, but that has drastically lessened as well. The biting has only occurred with my boyfriend, and I think it was petting-induced. Otherwise, it’s like magic has been performed. My mom says that he sleeps through the ENTIRE night and doesn’t bother AT ALL anymore. We have not experienced the “it will get worse before it will get better” phenomenon because it has only gotten better! Really, from the first night. I gave him his new toy and he looked almost drunk with pleasure! Ha. He looked like he almost didn’t know what to make of this “new feeling.” He definitely seems happier and less stressed, and we definitely are, too! Thank you SO much! Tina and Carolyn S.