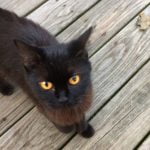 Intercat Aggression Solved: My older cat doesn’t seem to be angry at the kittens like he was. He doesn’t seem to care as much that they are here. He sleeps and rests a lot during the day, so sometimes when I bring the kittens up, he just stays on his chair and spends part of the time not even paying attention to them, sometimes he is turned away in a curled up sleeping position. I still will (behavior plan removed) as well, and he may get a little playful.The kittens don’t appear to be afraid of him and (behavior advice removed). Thank you, Valerie D. Lake Station, Indiana