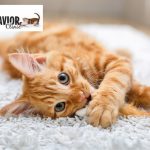 From Veterinarian Dr. Terrence K. Dear Mieshelle! It’s been a while since we touched base! I wanted to give you an update on Little Man, and our new life in Boston! Things have certainly been interesting! All in all, Little Man’s fabric eating has diminished in both occurrence and severity. He still can’t quite resist an unsupervised plastic bag, but as far as fabric goes….let’s just say we don’t have to hide our dishtowels anymore! We moved to Boston, and got a puppy, Amelia. Our best guess as to her breed would be a Bernese Mountain Dog/Basset Hound? About 35 lbs. See attached photo (with extra static in the ears!). The fact that Little Man’s behavior got so much better once the dog was in the household, leads me to believe he was “bored.” Now, perhaps this would indicate some type of cat autism, because his previous level of stimulation would be enough for any other average cat, and yet holes were appearing in bedsheets, and any fabric left vulnerable. In short, we got the dog, and Little Man was darling as always, and he and the dog now play together, chase the same balls, etc. Little Man has even tried to steal her rawhide bone on occasion. It’s almost like he is constantly observing what the dog is up to, so much that he has no time for fabric consumption? Little Man’s sister Chloe remains indifferent as always! That isn’t all. Two weeks ago…enter “Kosmo”. Kosmo is MY 4 year old beefcake of a kitty, who has been with my mother in CA for the past couple of years along with my other little ferral crazy kitty “Face.” Face passed away this past December from heart failure. Face was always dominant and Kosmo was always “nervous”. We were a little worried that Chloe and Little Man would dominate Kosmo, just like Face had, making Kosmo’s location adjustment challenging. We were wrong. Little Man and Kosmo have very very similar loving personalities (Kosmo does NOT have any of the weird eating fabric/plastic issues…) and I am very surprised how well the three cats and the one dog are getting along. We’ve invested in a tall cat tower (which…ahem, all three cats seem to fat for the middle hiding space) and everyone is sharing, and cuddly, and honestly, more ACTIVE that before Kosmo arrived. Thanks again for the valuable input you provided in the past! Animals are SO fascinating!! Sincerely, Terence K. DVM